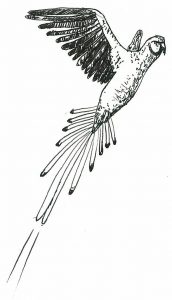 A site specific play on the life and times of Phillip Thicknesse, Governor of Landguard Fort 1753 – 1766.   Led by four professional actors, with contemporary 18th century music, puppets and community participation, a play to be enjoyed by all ages.

Thicknesse is a fabulous character who fought with everyone who thought they were his superior – he had a long running battle with Lord Orwell who commanded the troops that manned the Fort – but was adored by his wives and very much respected by his men for refusing to dole out physical punishments. He was especially appreciated by his, Ann, an opera singer.

After his time at the Fort, and pursued by debt, Thicknesse set out for Europe with Ann, his pet monkey and parakeet. And a good time was had by all.

Landguard Fort, is an extraordinary venue with a big central courtyard surrounded by rooms and fortifications –  an ideal location to bring this period of history to life.

Peppy Barlow is a founder member of the WOVEN theatre company .  Her plays include a family trilogy:  Mothering Sunday, runner up for the Verity Bargate Award, Missing toured by Woven and Broken, Pulse Festival 2005.  Other work  includes In the shadow of the doorway  BBC Radio 4; The Sutton Hoo Mob  Eastern Angles touring 1994 and 2006;  Turning the Tide for The Open Space Theatre and Trojan Whores which had a six week run at  The Courtyard Theatre, Hoxton 2007 – co-written with Sally Wilden and Dawn Rose.

‘I fell in love with Landguard Fort while organising events for the Felixstowe Book Festival.  Getting  to know Philip Thicknesse has brought it alive in a way that nothing else could.’

Sally Wilden joined  Woven in 2006 as co-author and director of Trojan Whores.  Her other plays include Codes of Practice, toured to major theatres in East Anglia; a radio play, The Wall, which won the BBC /Eastern Arts competition and was broadcast by the BBC.  She received a UK Film Council script development award for her feature length film, Someone Awake Somewhere and her short story. An audio/visual piece, The Servant’s Tale, was presented at an exhibition at the Mercury Theatre.

Sally says of Ann Thicknesse, “ I really enjoyed discovering what a feisty, independent woman she was.  She loved her husband but never lost sight of her own ambitions.’

Anna Birch has developed a number of scripts for the Woven Theatre Company and directed the production of Peppy Barlow’s Broken at the Pulse Festival in 2005.  She is very pleased to be working on this exciting piece at Landguard Fort.  ‘What a fabulous venue.  There are all sorts of performance possibilities and the story of Philip Thicknesse is part of the fabric of the building.’

Anna specialises in site specific productions and new writing and is Artistic Director of Fragments and Monuments, a performance and film company.  She is a Professor at the Royal Conservatoire of Scotland and will be running workshops at the Felixstowe Academy in preparation for this production.